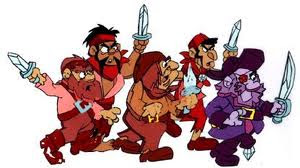 5 pirates of different ages have a treasure of 100 gold coins.

On their ship, they decide to split the coins using this scheme:

The oldest pirate proposes how to share the coins, and ALL pirates (including the oldest) vote for or against it.

If 50% or more of the pirates vote for it, then the coins will be shared that way. Otherwise, the pirate proposing the scheme will be thrown overboard, and the process is repeated with the pirates that remain.

As pirates tend to be a bloodthirsty bunch, if a pirate would get the same number of coins if he voted for or against a proposal, he will vote against so that the pirate who proposed the plan will be thrown overboard.

Assuming that all 5 pirates are intelligent, rational, greedy, and do not wish to die, (and are rather good at math for pirates) what will happen?
Answer :
To understand the answer,
we need to reduce this problem to only 2 pirates. So what happens if there are only 2 pirates. Pirate 2 can easily propose that he gets all the 100 gold coins. Since he constitutes 50% of the pirates, the proposal has to be accepted leaving Pirate 1 with nothing.

Now let’s look at 3 pirates situation, Pirate 3 knows that if his proposal does not get accepted, then pirate 2 will get all the gold and pirate 1 will get nothing. So he decides to bribe pirate 1 with one gold coin. Pirate 1 knows that one gold coin is better than nothing so he has to back pirate 3. Pirate 3 proposes {pirate 1, pirate 2, pirate 3} {1, 0, 99}. Since pirate 1 and 3 will vote for it, it will be accepted.

If there are 4 pirates, pirate 4 needs to get one more pirate to vote for his proposal. Pirate 4 realizes that if he dies, pirate 2 will get nothing (according to the proposal with 3 pirates) so he can easily bribe pirate 2 with one gold coin to get his vote. So the distribution will be {0, 1, 0, 99}.

Smart right? Now can you figure out the distribution with 5 pirates? Let’s see. Pirate 5 needs 2 votes and he knows that if he dies, pirate 1 and 3 will get nothing. He can easily bribe pirates 1 and 3 with one gold coin each to get their vote. In the end, he proposes {1, 0, 1, 0, 98}. This proposal will get accepted and provide the maximum amount of gold to pirate 5.
Bonus: Think about what would happen if there are 15 pirates or 25 pirates. Post the answer in the comments section.
Posted by Interview Puzzles
Labels: Induction Puzzles, Interview Puzzle
at 7:04 AM