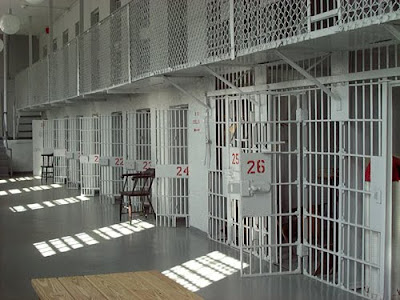 The Warden and 23 prisoners


The warden meets with 23 new prisoners when they arrive. He tells them, "You may meet today and plan a strategy. But after today, you will be in isolated cells and will have no communication with one another.

"In the prison is a switch room, which contains two light switches labeled 1 and 2, each of which can be in either up or the down position. I am not telling you their present positions. The switches are not connected to anything.

"Given enough time, everyone will eventually visit the switch room the same number of times as everyone else. At any time, anyone may declare to me, 'We have all visited the switch room.'

"If it is true, then you will all be set free. If it is false, and somebody has not yet visited the switch room, you will all die horribly. You will be carefully monitored, and any attempt to break any of these rules will result in instant death to all of you"

What is the strategy they come up with so that they can be free?

The prisoners can not be certain that all have visited the room after the leader flips the switch down 23 times, as the first 12 prisoners plus the leader might be taken to the room 24 times before anyone else is allowed into the room. Because the initial state of the switch might be up, the prisoners must flip the first switch up twice. If they decide to flip it up only once, the leader will not know if he should count to 22 or 23.

In the example of three prisoners, the leader must flip the first switch down three times to be sure all prisoners have visited the room, twice for the two other prisoners and once more in case the switch was initially up.